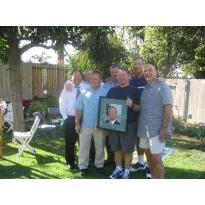 Terrence Patrick Malone, beloved husband, father, son, brother, and friend, passed away peacefully on March 17th, St. Patrick’s Day, after a heroic eighteen month battle with cancer. His wife and family were at his side. Terry was 49 years old.
Terry was a lifelong resident of Southern California, born in Los Angeles and growing up in Fountain Valley, he graduated from Fountain Valley High School and attended Cal State University Long Beach. After college, Terry settled in Leucedia, until he moved back to Orange County in 2002, living in Irvine.
Terry was a true ‘Renaissance man,’with wide ranging talents and interests, and successes in a number of fields. He began his working life as a partner in a construction business, then made a successful career in the technology industry. Always a man who followed his heart, Terry’s passion for learning had recently led him to pursue training to become a high school math teacher.
Terry loved politics, sports, music, and film. He loved conversation and the exchange of ideas, and always relished a good spirited debate on any topic!
His life long passions were spending time with his daughter Casey, music, reading, all kinds of sports, and enjoying his family and friends. One of his favorite excursions was an annual familyreuinon to Lake Tahoe, where Terry would rally family members of all ages to join in spirited games of Scrabble, Cribbage, Pinochle and Uno, or find an adventure roller blading, hiking on the ski slopes, or visiting local sites.
In addition to many caring friends, Terry is survived and loved by his wife, Connie, daughter Casey, stepsons Mark, Tyler, and Jason, his mother Betty Badgett, his sibilings, Kathy Leeks, Tom Malone, Traci Malone and Adam Badgett, and his nephews and nieces, T.D. and Molly Malone, Stephanie and Brad Leeks, and Alicia, Brooke, and Lindsay Badgette. Terry’s legacy is one of love, laughter, courage, and kindness shared with all those whose lives were touched by him. Terry’s family wishes to express their gratitude to the Chao Family Comprehensive Cancer Center and the UCI Medical Center for their wonderful care and supporr over the past eighteen months.