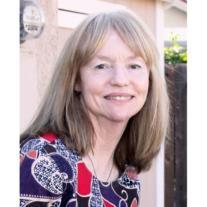 Wildman, Suzanne “Suzi” Marie, born in Los Angeles, CA, on February 8, 1947, passed away peacefully surrounded by family at Saddleback Hospital in Laguna Hills, CA, on November 5, 2014, at the age of 67. She was a resident of Orange County for 52 years.

Suzi graduated in 1964 from Sunny Hills High School and in 1969 from Colorado State University with a degree in Sociology with emphasis in Anthropology. She spent her early years out of college working at Smith International as a receptionist and at Security Pacific Bank as a supervisor.

After only knowing each other as acquaintances in high school, she re-met her soon to be husband Michael in 1970, married in 1973, and would remain so for the next 41 years until her passing. Together they were blessed with a son Robert in 1974. Suzi became a homemaker and occasionally worked at her father’s sports records company Pacific Coast Archives, her son’s high school St. Margaret’s, and later in life at Bath and Body Works.

As far as hobbies Suzi loved dance, starting with tap as a child, ballet a bit later, and then Irish dance late in life. She successfully competed in and won several medals for her Irish dancing skills at competitions.