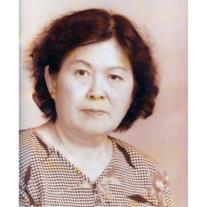 She was born in Jember, East Java, Indonesia on December 20, 1939. Married to late husband Agus Tjahjono Hadikusumo (went home with the Lord on May 2013). Together with her husband, she raised all six children while running their business as well.

She was remembered as a good cook within the family.

She moved to the United States of America in 2000. The past four years have been the toughest time for her in fighting the Parkinson’s Disease, but she remained strong fighting it.

Last December 2014, she had a chance to celebrate her seventy fifth birthday with the family. On February 4, 2015, she had a mild stroke causing her to be comatose state, and peacefully went home with the Lord on February 20, 2015, at 11:15 pm, surrounded by sons, daughters, daughters in law, and grandchildren at Western Medical Center, Santa Ana, California.

She will be buried in Indonesia, by her beloved husband’s side.

She will be remembered and greatly missed.