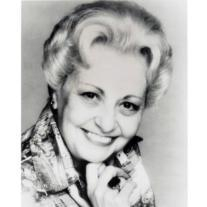 Remigia (Midge) M. Marinello was born on August 18, 1919 in Chicago, Illinois to Nicholas & Marietta Maggio. She passed to her Heavenly Father December 23, 2011 in Lake Forest, California at 92 years young. Midge began her acting career at the age of five. By the age of sixteen she was directing little theater & had established the group called ‘The Maggio Players’. She graduated with a BA degree form the Chicago Conservatory of Speech & Drama.
She continued her career until 1943 when she married Salvatore Marinello (deceased) & proceeded to raise a family. At the age of fifty she returned to her theatrical career in stage, movies & television commercials. She was a life long member of Screen Actor’s Guild & Actor’s Equity. She was an avid reader & loved acting, family & friends.

In lieu of flowers, the family requests donations to the American Diabetes Association online at http://www.diabetes.org/donate/ and in memory of Remigia Marinello. Please pray for the repose of Remigia’s soul.