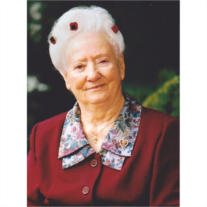 Born on October 22, 1912 in Alvin, Colorado, she was the third of 5 children born to Willamina and John Asher Conover. During her childhood, she lived in Colorado and Nebraska. She graduated from Trenton High School in 1931. In 1932, she moved to Pasadena, California to live with her older sister.

Lola met the love of her life, George Long of Pasadena and they married in 1935. Their only child, George Frederick Long, was born in August, 1936. Lola and George were a very hardworking couple starting out with roadside fruit and vegetable stands in the San Gabriel Valley. By 1940, they owned a 60-acre date orchard in Coachella Valley and had established Long’s Date Gardens on Foothill Boulevard in Pasadena. George passed away in 1951 at the age of 36. Lola operated the business until her retirement in 1970. In 2002, she moved from Pasadena to Lake Forest to be closer to her family.

Lola was a devoted Christian throughout her entire life. She maintained many friendships over the years, and never missed an opportunity to send a card to those celebrating special events in their lives. She attended Church in the Park (Calvary Chapel) at El Toro Mobile Estates for the past eight years.

Services will be held on Friday, December 9, 2016 at 1:00 PM at O’Connor Mortuary, 25301 Alicia Parkway, Laguna Hills, California. In lieu of flowers, donations can be made in her memory to a charity of your choice.