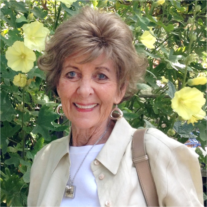 Kathryn Prey Robertson, formerly of Watertown, SD, died peacefully after a long illness March 3 at her home in Dove Canyon, Calif. She was 75.

Robertson was born April 16, 1941 in Watertown, SD. She and her twin sister, Virginia Prey Berlin, were the only children of Dr. E. Clark Prey and Evelyn Koenig Prey of Watertown. Dr. Prey ran a successful optometry practice in downtown Watertown for approximately 50 years and was active member of the Masonic Lodge.

Robertson graduated from Watertown High School in 1959 and attended the University of South Dakota where she met her husband, Gary Robertson. The couple married in 1963 and shortly thereafter moved to Arizona, and then settled in Orange County, California, where they started their family. Robertson was an elementary school teacher in the Fountain Valley School District for almost 20 years. After retiring from teaching, she began a second career assisting her sons with their medical supply companies.