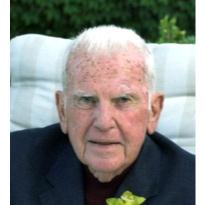 Gerry joined the US Navy in 1944 and graduated college after the war. Gerry and Liz were married in 1950 in San Francisco, and soon after built a home and pig farm in Placer County, California. After relocating to Southern California in 1953, Gerry spent his career as an accountant and property manager. He had a passion for fast, sporty cars and loved camping, boating, and fishing with his friends and large, loving family. He will be remembered for his great sense of humor and his Irish gift for story-telling.

A Funeral Mass will take place Friday, September 9th, 2011 at 11:00am at St. Edward the Confessor Catholic Church in Dana Point, CA.

In lieu of flowers, a donation can be made in Gerry’s name to America’s VetDogs at www.vetdogs.org/giving.