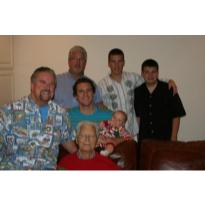 Daniel Joseph Young – Beloved husband, father, grandfather, great-grandfather, teacher, coach, golfer, and friend, passed away peacefully in his home with his family at his side, October 15, 2009. He was 92 years young. Dan was born in Cleveland, Ohio on January 22, 1917 to parents Helen and Stanislaw. He graduated from Ohio University, attended Notre Dame Naval Mid-Shipman’s School and served as a U.S. Navy officer aboard a mine-sweeper in the Pacific in World War II. In California he met his life-long love, Mary Lee, a San Bernardino, California native, a beautiful young dancer who would tour with the USO during the war. They were married from January 16, 1944 until his passing.

After the war Dan and Mary Lee settled in San Bernardino. Dan worked as a teacher for 35 years at Pacific High School where he taught mathematics and was a CIF Championship golf coach. He also taught at San Bernardino Valley College and later at the University of California Irvine, where he was a lecturer in the Teacher Education Department.

After retiring from teaching, he and Mary Lee settled in Laguna Niguel, California, where he enjoyed his family, playing golf, and joking with friends, new and old.

He is survived by his loving wife of 65 years, Mary Lee; his three children, Tim, Christie, and Jim and daughter-in-law Kathy; his five grandchildren, Alicia, Danny, Jimmy, Joey and Marisa; and his two great-grandchildren, Kiley and Jason; and numerous nieces, nephews, and grand and great nieces and nephews. He is predeceased by his parents, his sister Helen and his brothers George and Flory.