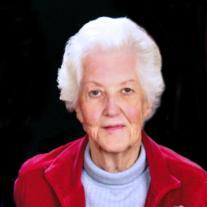 Bluett, Betty Jane, daughter of Robert and Mildred Collins, was born on May 25th, 1920, in Los Angeles, CA. She graduated from Fremont High School in L.A. in 1938 and married Ralph Emerson Bluett, Jr. in September of that year. Betty raised her three children in the Los Angeles area as a single mom following her divorce.

Family vacations and genealogy research were some of her favorite activities. She was employed by Sears-Roebuck for 23 years as a Department Manager and retired to Laguna Woods in 1978.

A graveside service will be held at the Rose Hills Cemetery in Whittier, CA.