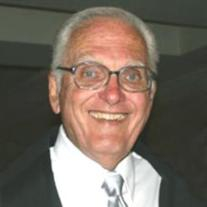 He attended Troy State, Alabama on a basketball scholarship where he rarely missed a shot, especially his ‘outside shot’. He was also a skilled golfer and could be found on the golf course sometimes, up to 54 holes a day.

He became a guidance counselor at the high school of both of his daughter’s where his beautiful smile and warmth as a teacher and adult had a huge impact on the lives of many students.

Dave & his wife, Mel moved to Lake Mission Viejo where he immediately became known by many as ‘Dave, the Dock Master’… he could be seen daily cruising around on Carpe Diem and assisting people with their new boats.

A handy-dandy guy, with a mind for engineering, a big heart and a pair of helping hands, he was always on the go with a project in ‘toe.’

His ‘spice’ and charisma together with his determination and sparkling blue eyes is what we loved about him and made him special to all of us.

In lieu of flowers, donations may be made to Stand Up to Cancer at https://secure.standup2cancer.org/custom/?c=donate&su2ccs=PRUPTO2009-8372.

21 responses to A. David Gingold