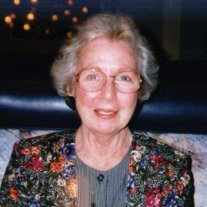 Zuda Louise Rash, passed away peacefully on March 15, 2013 at the home of her son in Fallbrook with her son and daughter at her side. She was 89 years old at the time of her passing.

Zuda was born on September 17, 1923 in Rocky Crest, Kentucky, the youngest of six children. She spent her childhood in Middletown, Ohio and after graduating from high school moved to Long Beach, CA. She met her husband, Bill, on a blind date during the war and it was love at first sight and they were married on February 3, 1945. After raising their children while living in the Garden Grove and Mission Viejo areas, they located to their 20 acre avocado grove dream home in Fallbrook in 1975. They returned to Mission Viejo in 2006 where they lived in the Palmia retirement community.

She is loved and remembered for her never failing devotion and support of her family. Her dignity and sense of humor continued throughout her four month long struggle. She will be greatly missed, and forever be in our hearts.

Zuda’s family would like to thank all of those who helped with her care during these few months however there are not enough words to thank Christian Arranz, her devoted caregiver.

In lieu of flowers, donations may be made to the Wounded Warriors Foundations or the Parkinson’s Association.