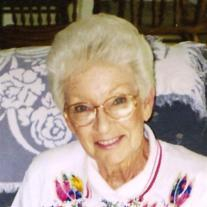 Wilma was born April 13, 1931, in Meridian Idaho, a daughter of John Lorin and Amy Louise (Thompson) Walker. Wilma and their family moved to Perry, Utah in 1941 where she attended Box Elder Jr. High and High School. Following graduation she worked as a waitress at Maddox’s in Perry.

Wilma married Shirl F Carter, whom she had grown up with in Perry on August 11, 1951. Their marriage was later solemnized in the Salt Lake City LDS Temple. As a member of The Church of Jesus Christ of Latter-day Saints, Wilma enjoyed serving in many callings as she and Shirl raised their 4 girls. She also did extensive genealogy work with her sister Cleo, transcribing millions of records for the Family Search Transcription program.

Wilma was a very talented painter, an accomplished golfer, and worked as a model after her girls graduated high school. She won many golf trophies playing with her husband in tournaments from Monterey California to Rosarito Mexico. Wilma developed her incredible painting skill through beautiful landscape oil paintings. In the 1980’s, she put her talent to use in a craft business that she and Shirl started. For over 14 years, Wilma expertly designed & painted many wooden holiday statues and ornaments that were cut and assembled by Shirl in their garage. She created many family heirlooms and memories through her service and talents. Her greatest legacy came through her love for her large family. She never failed to remember a birthday or special event.

A viewing will be held Saturday, January 19th, 10 am at The Church of Jesus Christ of Latter-day Saint, 23850 Los Alisos Blvd, Mission Viejo. Graveside service and internment will follow at El Toro Memorial Park.