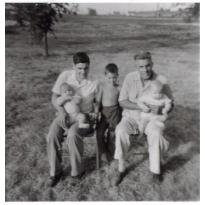 Survivors include his wife; sons, Warren Kent and William Craig, both of Mission Viejo; sister, Lana Wood, of Lincoln, NE; brother, Lanford, of Tucson, AZ; and 7 grandchildren. He was preceded in death by his son, Steven Keith; daughter, Linda Marie Beisheim; and brother, Dwaine.

He received his undergraduate degree from the University of Nebraska – Kearney UNK in 1950. He received Masters Degrees from UNK and Brown University. He served in the U.S. Army during the Korean Conflict.

He passionately enjoyed teaching math and chemistry to hundreds of students during his tenure as a teacher at Troy High School in Fullerton, CA, and college instructor at Orange Coast College and Saddleback College. He was Director of Allied Health Programs, and Acting Director of Records and Statistics at Kearney State College, 1967-1976. He was very active in the UNK Alumni Association of Southern California. Memorials may be made to the UNK Foundation Scholarship Fund.