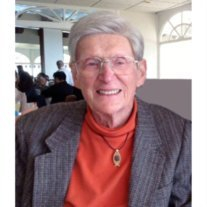 He was a Korean War veteran of the U.S. Army serving from November 3, 1950 to December 7, 1953. He received the Korean Service Medal, POW Medal, and Good Conduct Medal. He was employed as a designer and engineer for General Dynamics and NCR. He was an inventor and held a patent for an improved computer cable connector (Patent 5,044,975).

He is survived by his children, Kristen Roosa of San Diego, CA. and Lauren Satin of Huntington Beach, and brother, James Roosa of Mason, Ohio.