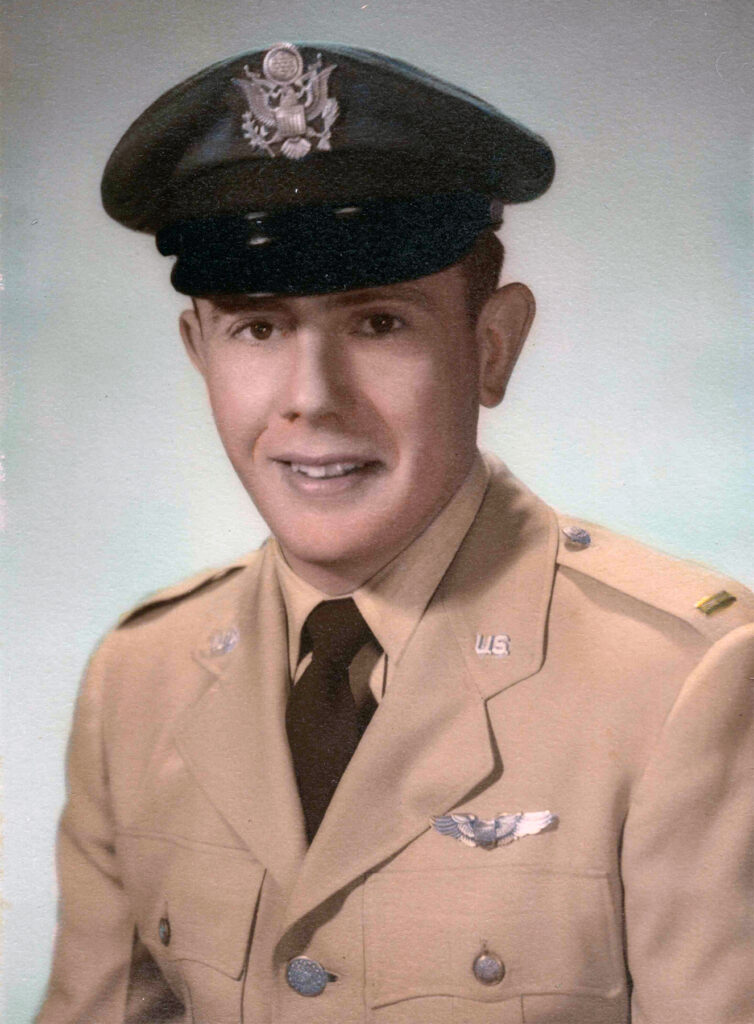 William D. Crapo, better known as “Bill,” “Dad” and “Grandpa” passed away peacefully in his home in Mission Viejo California on Thursday, August 4th, 2022. Bill was born on April 13th,1932 in Hollywood California to Frank and Frances Crapo. He attended Good Shepherd Elementary School and St. Monica’s Catholic High School where he was a member of the football team and participated in drama productions. He then attended Loyola University in Los Angeles, California and graduated in 1950 with a Bachelor of Arts Degree in Business Administration. While at Loyola, Bill was a member of the Sodality Organization, Sigma Rho Fraternity, and Industrial Relations Society. He also served as Grand Knight of the Knights of Columbus.

While stationed at Lockbourne Air Force Base, Bill met the love of his life, Nancy through a mutual friend on a blind date. They courted for three months long distance, as Nancy lived in Huntington, West Virginia. They became engaged in December 1956 and were married six months later on June 1st, 1957, beginning 65 years of marriage. After their honeymoon in Mount Pocono, Pennsylvania, they settled in Columbus where Nancy continued her journalism career at the “Columbus Dispatch” as women’s editor. Bill was honorably discharged from the Air Force one week after their first child, Stephen, was born in March 1959.

Six weeks later, the family moved to Southern California where Bill secured a position with Douglas Aircraft in Santa Monica as an Administrative Assistant in Engineering. In 1962, Bill was assigned to the Douglas Aircraft Field Station in Sacramento. Bill and Nancy bought their first home in Carmichael, and there they welcomed their next two children, Cheryl in August 1963, and John in July 1965. Douglas Aircraft then transferred Bill to a different division, Personnel Organization in Huntington Beach in 1966. The family moved to their new home in Laguna Niguel where they lived for 22 years. There they welcomed their fourth child, Mark in May,1974.

In the newly developed Laguna Niguel community, Bill and two neighbors, Vince Winninghoff and Harry Bethke organized the Laguna Niguel Little League, and he and Harry coached the Crown Valley Shell Little League team for several years. He also helped establish the Dana Hills High School Booster Club and was a member of the financial committee for the Capistrano Unified School District.

In 1988, Bill and Nancy decided to move to Nellie Gail Ranch and enjoyed the next six years entertaining friends and family as well as hosting their daughter, Cheryl’s, wedding reception at their home in 1992. Bill loved boats and had been a member of the Dana Point Aventura Sailing Association for several years and soon after moving to Nellie Gail, purchased a beautiful powerboat, that he christened “Almost Heaven” and kept at Newport Beach Harbor Back Bay.

During his tenure with Douglas Aircraft, he held the following positions: Manager of Labor Relations and Personnel Operations, Director of Personnel Operations, and then was appointed Director of Personnel at MDAC (McDonnell Douglas Astronautics Company) where he was responsible for labor relations duties at all West Coast components. He later became Vice President of Human Relations for MDAC, West Coast and retired from McDonnell Douglas in 1994 after 35 years with the company.

Deciding to leave Southern California, Bill and Nancy headed north in 1994 and purchased land in Nevada City, California on Banner Mountain (an extinct volcano) and built their “dream home”. While Bill was relaxing at home in retirement, Nancy took a position in special education at Deer Creek Elementary School, where she worked for 5 years.

Fulfilling their Celtic heritage, their first venture was joining the Gold Country Celtic Society (GCCS). They had a wonderful time attending Scottish Games and so got involved running an Irish Clan tent at several Northern California games. The couple was an intricate part of the GCCS, both serving as board members, and Bill created the position of Chief Herald. Nancy even served as Chief for two terms. When they were not sporting their tartan kilts, they were active in the Music in the Mountains organization, even hosting two of the percussionists for the summer season. As a result of Nancy’s stroke in 2008 and other medical difficulties, they returned to Southern California in 2016 to be close to their children and grandchildren. They purchased a home in Casta Del Sol, a retirement community in Mission Viejo.

Bill will be remembered for his dry wit and whimsical sense of humor. He was devoted to his wife, Nancy and was an enthusiastic supporter for all his children and grandchildren activities throughout their lives. Summer vacations with the family were a highlight of his life along with many memorable trips abroad with Nancy.