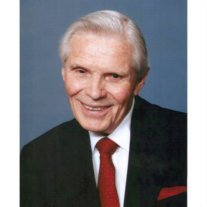 On May 24, 2013 Wallace E. Santmyers, 86 yrs., passed into eternity peacefully with family at his side. He was a wonderful father, step-father, grandfather, great-grandfather, brother, uncle and friend.

Wally was born January 3, 1927 in Queens, New York. He grew up in Astoria, NY where he met and married his first wife, Helen. During his early youth, he loved spending summers with his Aunt Leslie and Uncle Buster in Front Royal, VA. During World War II he served in the US Navy and continued serving in the Naval Reserves. He was a successful insurance auditor, retiring from Hartford Insurance in 1981. He lived in Plainview NY for forty years. After retirement he moved to the East end of Long Island where he enjoyed many wonderful neighbors and activities at Leisure Village in Ridge, NY. In 2011 he relocated to San Juan Capistrano, CA. He loved Civil War history, to ski, ride horses, travel and spend time with his beloved family and friends. Most of all he loved music, big band swing. He was a fan of Frank Sinatra, Judy Garland and his beloved Jeannette Mac-Donald and Nelson Eddy. He will be resting with his sweethearts of music and film forever. His favorite words ‘Can I lend you a hand’ were heard by many. He was a gentle, kind considerate man who always gave of himself. He was a true gentleman and will be greatly missed.

A Memorial Service will be held at the home of Joe and Dale Wood on Sunday Father Day, June 16th 4-6pm. (27941 Via de Costa, SJC, CA 92675). He will be interred at Bushnell National Cemetery on September 13th at 2:30 pm with full military honors. In lieu of flowers, donations may be made to Horizon Diversified (24632 Artemia, Mission Viejo, CA 92691) who cared for him the last 18 months of his life or the Alzheimer’s Society.