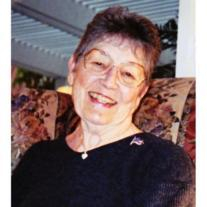 She participated in the USO during World War II while employed by Bank of America. Married R.J. Clifton in 1947.