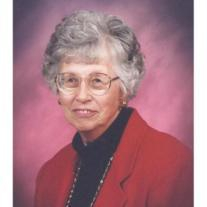 Virginia Ann (Ballou) Dismukes was born in Orlando, Florida on April 9, 1925 and died in Mission Viejo, California on May 31, 2012. She was the daughter of Floyd Calvin Ballou and Margaret Ruth Ballou and the sister of Carol Kesler and Suzanne Carter.

Virginia grew up in Erie, Pennsylvania. In the 1940s her family moved to Tucson, Arizona and then to Pomona, California. She was the mother of six children: Robert Dismukes of Falls Church, Virginia, John Dismukes of La Verne, California, Margaret Goodwin of Mission Viejo, Carol Phipps of Keizer, Oregon, Charles Dismukes of Temecula, California and Steven Dismukes of Medford, Oregon. She had 11 grandchildren. Her marriage to Thomas Dismukes ended in divorce.

Virginia lived most of her life in Covina, California where she raised her six children and was an active and dedicated member of the Covina United Methodist Church for nearly 60 years. She graduated from Millcreek High School in Erie and attended the University of Arizona, Woodberry College and Mt. San Antonio College.

Virginia’s remains will be inurned at El Toro Memorial Park in Lake Forest, California on Monday, July 2, at 10 a.m.

Memorial contributions in Virginia’s name may be made to the Covina United Methodist Church Memorial Fund, in care of Virginia Dismukes. The church address is: 437 W. San Bernardino Rd., Covina, California 91723-1521.

Virginia’s family wishes to thank her many friends at the Covina United Methodist Church for their help and support during this time of sorrow and celebration.