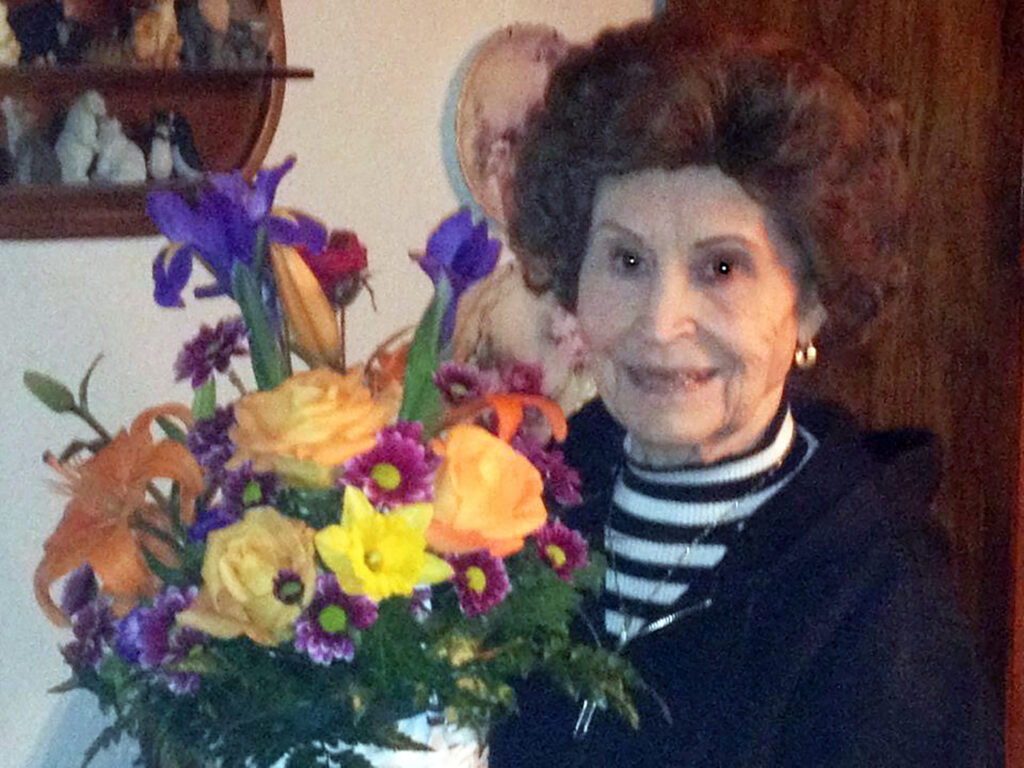 Veronica Katherine Ellis (Vera) passed away peacefully in her sleep at the age of 100 in Coto de Caza, CA after a decade long battle with Alzheimer’s.

Vera was born March 26, 1922 in Omaha Nebraska, the eldest of 5 children born to August and Lillian Rieser.  She spent her younger years in Omaha until her mid- teens when she traveled to Los Angeles to visit her Aunt Frieda and her paternal grandmother in Los Angeles. Shortly thereafter, her parents and siblings joined her for a new life in California. Vera graduated with the summer class of 1940 from Los Angeles High School.  She attended a Secretarial College and began her career as an Executive Assistant, first at California Bank where she met the love of her life, Robert James Ellis.  They were married November 19, 1949 at St. Paul’s Catholic Church in Los Angeles. They purchased their first home in Whittier, California where they began to raise their family.  Her career took her to the position of Secretary to the President of Lever Brothers, where she remained until her first pregnancy began to show.  From that point on she remained at home caring for her husband and her children. In 1966 the family moved to Valencia, CA. where the kids graduated high school and began their college years and careers.  In the mid 1970’s they made their final move to Laguna Hills, CA.  After this move Vera begrudgingly took classes to get her driver’s license at her children’s insistence.  Once she got behind the wheel of a car she discovered a new freedom and was able to go and do all the things that interested her.  She began a Bible study that she participated in for many years.  She took oil painting classes and began her passion with creating all her beautiful art. She took many China painting classes and made beautiful bisque dolls with handmade outfits. She sharpened her knitting and crocheting skills and she continued to sharpen her already excellent sewing skills and attended various Emeritus classes at Saddleback College. She was the consummate shopper and spent a great deal of time navigating all the malls and shops in her area and she loved every moment of it.  Through all these years she was a staunch advocate of animal rights and fought for years to end all cruelty to our furry friends.  She also fought for years for whales and dolphins and other sea life writing letters to officials of this government and others to stop the senseless killing of these majestic creatures, boycotting companies that were hurting animals and would not purchase any product from any country that did not conform to safer rules.

Vera had a real zest for life.  She loved to dance and sing and music always filled her homes. Family was always so important to her and we all have wonderful memories of family events where all her siblings and their kids would gather together.  A million wonderful memories. She was a wonderful mother, grandmother and great grandmother sharing her love of songs, poems and limerick’s and literally getting on the ground or in a treehouse to play with the youngest at their level. She loved live theatre and concerts, traveling, movies, eating great food at great restaurants, her vodka gimlets, margaritas and she was a self- admitted chocoholic to the end.

Vera leaves behind her children Jim Ellis and sons Michael Ellis and Elian A Ellis-Valadez, Debi Ellis and her son Eric Escalante, wife Carolyn and son Robert, Kevin Ellis and his wife Donna Ellis and sons Braden Ellis and Carson Ellis and her youngest brother Ronald Rieser, along with all her loving nieces and nephews.  She was preceded in death by her husband, Robert James Ellis, her parents, August and Lillian Rieser, siblings Robert Rieser, William Rieser, Eleanor Dice, her grandson Michael Escalante, Jr. and her daughter-in-law Cindy Loeb Ellis.

May she rest in eternal peace and may perpetual light shine upon her.

In lieu of flowers please make a donation in our mother’s name to the Alzheimer’s Association or a local animal shelter or animal rescue fund.