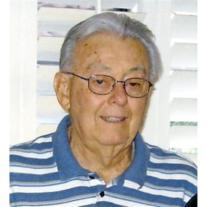 Vernon Ã¢‚¬ËœJoe’ Sellers, 82, of Mission Viejo, CA died April 9, 2012 in the comfort of his home, surrounded by loved ones.

Joe was born March 31, 1930, in Big Spring, Texas to Neoma and Bill Sellers. He grew up with his younger sister, Bobbie (Sellers) Nesbitt in Lubbock, Texas. Following graduation from Lubbock High School he was drafted into the Army where he was stationed in Colorado Springs, Colorado. Thereafter he moved to Southern California where he took up surfing and soon met Juanita Anderson. On June 5, 1959 Joe and Juanita were married in Lomita, CA. Joe and Juanita raised their two daughters, Terri and Robin, in Cypress, CA. Joe worked for McDonnell-Douglas in Torrance, CA for 35 years and retired in 1990. During his retirement years, he and Juanita moved from Cypress to Mission Viejo, CA. Joe enjoyed visiting the couple’s second home in Palm Springs, CA and was an avid golfer. He also enjoyed Starbucks Coffee, movies, Surfin’ Doughnut’s cinnamon rolls, spending time with his grandsons and, of course, golf.

We have lost someone very special to all of us and he will be dearly missed.