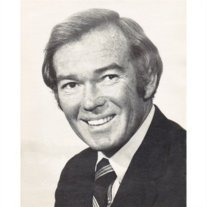 Thomas G. Skahill was born on October 28, 1928 in Cincinnati, Ohio to Edward and Jeanette Skahill. He passed away on July 24, 2013 in Laguna Niguel, CA of natural causes. Tom moved with his family to Los Angeles when he was six years old. He attended Catholic boys schools St. Brendans and Immaculate Heart of Mary, and sang with The Hollywood Bob Mitchell Boys Choir that was featured in several movies and entertainments of the day.

Tom is survived by his wife of 35 years, Patricia Cloyd; his children Katy, Matthew and Steven; and grandsons Sean and Brandon. Tom was predeceased by his son, Peter; his first wife, Alyce McLennan; and his sister, Kay.

Tom’s business experience included serving as Director of Construction for Foodmaker, Inc. during a time when 320 Jack in the Box restaurants were constructed nationwide in 3 years.

He served as Vice President, Business Development, of the M.H. Golden Construction Company in San Diego; as President of Skahill Marine, Inc; and as Sales Engineer for the John B. Kilroy Co., where he negotiated the sale, construction and leasing of new industrial and commercial facilities. Tom was actively engaged in real estate brokerage in Orange and Los Angeles Counties, working for W.H. Daum for 37 years.

As Tom’s longtime friend and fellow racing yachtsman, America’s Cup winner in 1970 Bill Ficker wrote of Tom recently: “A crew is an incredibly important part of any successful racing team, and Tom exemplified what a crew should be. He was always the first one to the boat and nobody had to tell Tom what to do. He made sure that everything was in its right place and made notes of anything that didn’t look right. He injected himself as the skipper’s right-hand man. Tom crewed for me and for Lowell North on Star Boats from about 1959 to about 1965. Many people that crew on Star Boats spend a lifetime and don’t have the record that Tom had. It is an exclusive fraternity, and those that are entitled to put four gold bars on their sails have bragging rights. The four gold bars signify a World Champion crew and Tom achieved that by crewing with Lowell North and winning the Star Boat World Championships in Rio in 1960.”

Bill Ficker continues: “Tom aided in other well-known sailors’ achievements, and one of those was his association with Jim Kilroy in the 1950’s. Tom helped get many outstanding, well-known sailors aboard Jim’s “Kialoa”. Tom was always an asset in the operations of successful boats and in the attraction of good crew members. Jim Kilroy’s success in sailing worldwide can certainly be attributed, at least partially, to getting a good start with Tom Skahill and many of his friends sailing with him.”

Tom was a gifted writer with an encyclopedic mind. He was, indeed, “a keeper of the lore.” He was a highly respected contributor to Wooden Boat magazine among other publications. He took part in writing the history of Newport Harbor YC, as well as San Diego YC. He was on the editorial board as a contributing writer for the Encyclopedia of Yacht Designers, published in 2006.

Among the memorabilia that Tom had collected and saved with special indication that “these writings mattered” was an essay- most likely a eulogy- for Ben Hughey.

These rules seemed to have been deemed the foundation for good conversation among the best of trusted friends: Goodness; Freedom; Cheerfulness; and Friendship. “Where you feel these qualities, you can let yourself go in the ease of hearty talk!”

Those would have been some conversations to have heard!

(Compiled by Kay North from materials supplied by Patricia Skahill.)

Memorial donations may be made to the Alzheimer’s Association.