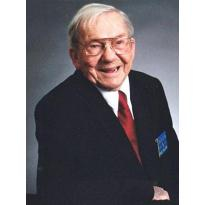 Sylvester ‘Skee’ Nelson passed away peacefully on March 28th after a gallant fight with cancer. Skee was deeply loved by his family, his Atria Woodbridge community, his fellow parishioners at St. John Neumann Catholic Church in Irvine, and by many others who came in contact with him over the years.

Skee was born on September 18, 1922 in Green Bay, Wisconsin. He was the youngest of eight brothers and sisters. After graduating from East High School in 1941, and with the attack on Pearl Harbor, Skee joined the Marine Corp. in 1942. While in bootcamp, Skee volunteered for the newly organized elite Marine unit- Carlson’s Marine Raiders, 4th Battalion, under Col. James Roosevelt. After serving in the Pacific theater from 1943-1945, and receiving two Purple Hearts, Skee went on to serve in Korea and Vietnam before retiring in 1973 as a First Sergeant after thirty years in the Corp.

Skee was preceded in death by his mother and father, his seven siblings, and his beloved daughter Carol. He is survived by his daughter Christine, son-in-law Jim, grandchildren Travis and Tyler, nieces Pat Vanden Avond and Doris Senn, nephew Gene Nelson and his wife Rosa, and many other nieces and nephews.

Skee’s family would like to thank the St. John Neumann and Atria Woodbridge communities, Dr. Siskind, St. Michael’s Hospice and other care givers for their love and support — and last, but not least, the Green Bay Packers for producing a Super Bowl win in Skee’s final season.

Services will be held at St. John Neumann Catholic Church in Irvine on Friday, April 8th at 8:30 a.m., with reception to follow.