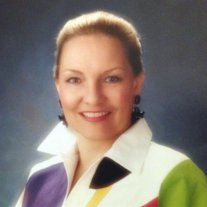 Susanne was born in Los Angeles in 1936 and raised in Glendale where she attended Incarnation Elementary School and Holy Family High School. She later attended UCLA where she was a member if Pi Beta Phi Sorority, a Homecoming Princess and one of the original Bruin Belles.

After college she worked as a stewardess for American Airlines. While with American, she appeared in print ads for the company and was the face of American Airlines throughout the late 1950’s.

Susanne and Michael got married on January 28, 1961. With the arrival of their first daughter in 1963, she became a homemaker – a position she held for the remainder of her life.

She was extremely proud of her granddaughter, Claire. She played an integral part in her upbringing teaching Claire how to read at an early age and closely watching her progress through high school and her acceptance to college.

Susanne was a very loving, kind and warm hearted person who always had a hug and a smile for everyone. She will be greatly missed by her family and friends.