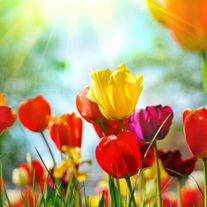 She lived in Garden Grove, CA for nearly her entire life until marriage at age 21 to Charles E. Mee. They lived 1 year in Tustin before moving to their first home in Mission Viejo, CA where they had 5 children, Zachary in 1972, Todd in 1974, Jocelyn and Kathryn (identical twins) in 1977 and Jeff in 1984.

She attended UC Santa Barbara on a scholarship after high school at Bolsa Grande High in Garden Grove,CA then returned to, and graduated from, Santa Ana College before attending Cal State Fullerton, where she majored in primary education.

She raised all 5 children as a homemaker. She was active in PTA, band, cheerleading and athletic boosters, supporting all 5 kids. She became active in the Wounded Warrior Project after the death of her son Todd, in the U.S. Navy in 2009. She has successfully raised nearly $2,000 for the Project. When she wasn’t tending to her kids, she loved clerking at her husband’s store, Rite-Price Pharmacy in Lake Forest, CA or tending to her beloved border collies.

She was married for 44 wonderful years and was the consummate companion to her husband, Charley. She was a great mother and friend to her children. She loved people and had an amazing capacity to make people feel at ease. She will be greatly missed by all who knew her.

She will be buried next to her son Todd and father, William A. Rash, at El Toro Memorial Park in Lake Forest, CA.

In lieu of flowers, she would want donations sent to the Wounded Warrior Project at www.WoundedWarriorProject.Org in her son Todd’s name, 2nd Class Petty Officer Todd William Mee, USN.