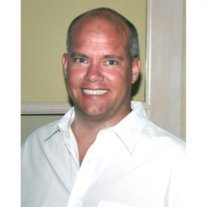 Steven Matthew Olson was born August 17, 1966 in Fullerton, California. He was the son of Gordon and Helen Olson, residents of San Clemente, and was the fourth of five children. Steve attended Sonora High School in La Habra, California, and graduated in 1984. Steve earned his Bachelor of Arts in Communications in 1989 from USC and was a proud Trojan.

Steve had a successful career in sales, most recently in the medical equipment industry. Steve was a long-time resident of Newport Beach and had recently moved to Newport Coast. Steve enjoyed surfing, swimming, golfing, and attending USC football games. Steve also enjoyed vacationing with family and friends and traveled to Mexico, Indonesia and Fiji on surfing adventures.

Steve met the love of his life, Trish Donnelly, in May, 2004 and they were married three years later in May, 2007. Their daughter, Chloe, was born last year and Steve was a deeply devoted father to his baby girl. He especially loved taking long walks on Balboa Island, the Newport Peninsula and the Back Bay with Trish and Chloe, both of whom he adored.

Steve was a loving husband, father, brother, uncle, and friend who had an upbeat, spirited and funny personality. When Steve was in the room, a joke or a gag was bound to happen and all who knew him loved his sense of humor. Steve was a true kid at heart who loved inventing silly games to play with his nieces and nephews.

Steve passed away on June 24, 2013 in a tragic automobile accident. Steve will be greatly missed by all.

A service to celebrate Steve’s life will be held on Monday, July 1, 2013 at 10:00 am at Our Lady Queen of Angels Catholic Church in Newport Beach.