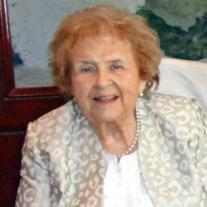 The Life of Shirley Ann Tarter

Shirley Tarter: wife, sister, mom, grandma, and great-grandma, was born on February 15, 1928 in Hibbing, Minnesota to John and Mae Westman. After her mother remarried, she was the oldest sibling to one brother, one half brother, and two half sisters. She attended Live Oak High School in Morgan Hill, CA, graduating in 1946. Later Shirley met and dated George “Bud” Tarter; she married the love of her life on July 12, 1947. They started their life together in Morgan Hill, CA.

In 1949, Shirley had her first child, a daughter named Donna. The family moved to San Jose, CA in 1952, she had her second child, a son named Chip. Shirley was a devoted wife and mother. She enjoyed being a homemaker, was an excellent baker and cook, and loved watching her children grow up. She was integral in helping support the family-owned business for over 40 years.

Shirley enjoyed making her home a comfortable, welcoming place for anyone who came to visit. This was especially true when she became a grandmother. She was very active in her grandchildren’s lives, making it a point to “keep up” with all of the various activities they were involved in by attending special events. She loved pampering her husband, cooking special meals for her kids and grandchildren, entertaining for the holidays, and hosting big family gatherings for close friends and extended family.

In 1992, Shirley and Bud moved to Lodi, CA, near her daughter, Donna, and her family. She continued to be a devoted and caring mother and grandmother and developed close relationships with neighbors and friends. Shirley was an avid reader, being well read and educated about religion and world affairs. She enjoyed debating political ideas and current events with people who have different points of view. She loved having a beautiful garden, full of fruit trees and bright blossoming flowers.

In 2010, Shirley traveled to Aliso Viejo, CA for an extended stay with her son and his family. She met new friends and loved spending time with her great-grandchildren. During her time in southern California, she enjoyed taking family trips and visiting new places. After a short illness in early 2012, Shirley moved to a rehabilitation facility, where she surprised no one by establishing many close friendships with residents and staff. Comments from those who knew Shirley described her as always bringing a smile to the face of others, always having a kind word to share, and inspiring others to stay strong while facing their own struggles.

Shirley will be remembered with much love and affection by her daughter and husband Donna (Bob), her son and wife Chip (Doris), grandchildren Mandy, (spouse Josh), Josh, (spouse Birgitt), Shelly, (spouse Kyle), Jon, and great-grandchildren Kylie and Henry.

Shirley joins her beloved husband in heaven, where he has been waiting for her,and how happy he must be to have her back in his arms.