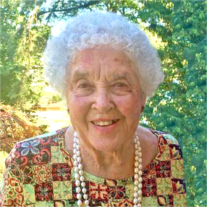 Shirley Ann Eastwood, born in Monrovia, California on January the 18th in 1927. She was known as: wife, mother, grandmother, Poopsie, and Mrs. Claus. Shirley passed away on Friday, November 3rd, 2017 at 90 years of age in Mission Viejo, California. She is survived by her husband Leonard D Eastwood of 70 years, and her 9 children, Kathleen Harris, Katherine Helm, Susan Gray, Stephenie Erickson, Stephen Eastwood, Sharon Gibby, David Eastwood, Robert Eastwood, and Karen Jessee. Shirley has 33 grandchildren and 73 great grandchildren (one more expected in May 2018). She was the daughter of Orval Detrick and Onita Roath and her one brother Don Detrick. She graduated from Compton High School.

Shirley married Leonard on June 29th 1947 in Compton, California. Her greatest pleasure and permanent calling in life was that of a homemaker. She was very active in the Church of Jesus Christ of Latter-day Saints and taught youth classes most of her life. The total family consists of the 9 children, 33 grandchildren, 73 great grandchildren and all of their spouses equals a total of 149.

Services will be held at The Church of Jesus Christ of Latter-day Saints, 27976 Marguerite Parkway in Mission Viejo on Saturday November 11th 2017 at 11am. The burial will be held at Rose Hills Memorial Park in Whittier, California.