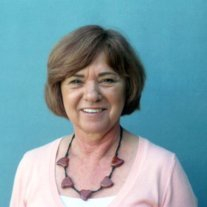 Sharon Elizabeth Smith, 66, passed away on October 25, 2013 after a short battle with cancer. She was at home, surrounded by her family and friends. Sharon’s life was centered around her two children, Sam and Cara along with her two Boston Terriers “Ruby and Johnnie”.

Sharon was born in Waupaca, Wisconsin on August 31, 1947. Every year when she celebrated it was never referred to as her birthday but as “the end of August”. Sharon was the youngest of six children and spent her entire childhood in Waupaca. After her high school graduation in the summer of 1965 Sharon ventured to San Francisco with her mom, Elizabeth Woodliff, to follow in the footsteps of her sisters and aunts. In 1970 while still living in San Francisco, Sharon married her long time friend, Fred Smith. After the wedding, Fred and Sharon followed Fred’s career in the Marine Corps to Camp Pendleton. In 1973, they moved to San Luis Obispo to attend college and after Fred’s college graduation moved to Anaheim in 1975. While living in Anaheim the happy couple welcomed their first daughter, Cara Nicole Smith, on December 10, 1976. They stayed in Anaheim until 1978 when they decided to move to El Toro (Lake Forest) which became their home for many years to come. On March 21, 1984, Sharon gave birth to their second baby, Samuel Hayes Smith. He was delivered unexpectedly by the local fire department in their home.

Sharon worked at Trabuco Canyon Water District for 22 years as the District Treasurer/Board Secretary. She retired in February of 2010 and has spent the years since working on her house and gardening, two of her favorite past times. She also spent many hours making hand-made gifts for those she cared about and planning intimate parties for close friends and family. Her secret baked bean recipe was a favorite of everyone and the recipe still remains a secret. Sharon also had a passion for traveling and was thrilled to have been able to travel the world with Cara, her own personal tour guide.