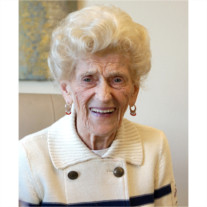 Ruth was born on May 24, 1924 in Detroit, MI to Anna and Anthony Locatis, and grew up there alongside her beloved sister Anne. After she completed her education, her cousin introduced her to a man named Robert Harvey, and they fell in love. Once married, their life’s journey took them through Michigan, California, Alaska, Wyoming and Massachusetts.

Ruth worked for 25 years in administrative and clerical positions, adored by her colleagues and earning Employee of the Year twice while working at the IRS. This well-earned esteem was due to her caring and diligent ways, which were mirrored in her devotion to her husband and family. Always putting family first, she was fiercely independent and strong when it came to her own needs.

She was known for her beautiful array of hats, her penchant for rabbit-themed decor (from the “Harvey” namesake Jimmy Stewart), and for the joy and warmth she brought to every occasion. She will be missed at her senior center, her Catholic parish, and most of all at home, where memories of her love, laughter and rhubarb pie will live on.

Ruth is survived by her three children, Paul, Joanne and Bruce; her four grandchildren, Erik, Jeremy, Liza and Stephan; and her seven great-grandchildren, Noah, Fred, Erin, Erica, Trent, Elliot and Calista. She was preceded in death by Robert Harvey, her loving husband for 53 years.

In lieu of flowers, the family asks that donations be made to Alzheimer’s Orange County at http://alzoc.org/donate.