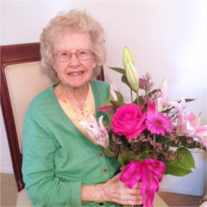 Ruth Elaine Donnelly Bartos of Redlands, California, passed away the night of March 27th, 2017 in Anaheim, California at the age of 91. She was born on July 23rd, 1925 in Augusta, Wisconsin and was one of six children to Rev. William James Donnelly and Margaret Agnes Laurie. While she was earning her Bachelor’s Degree in English at The University of Wisconsin-Eau Claire she met the late Rev. Dr. John Bartos. They were married August 19th, 1950. Together they had two children, Timothy William Bartos (Diane) of Clifton Park, NY and Laurie Kay Bartos Adamson (Kent) of San Clemente, CA. Their life serving the Lord together took them all across the United States including; Janesville, WI, Delavan, WI, Fond du Lac, WI, Painesville, OH, Haverhill, MA, and Westchester, CA.

Ruth was beloved by all for her humble demeanor, loving spirit, and utmost generosity. Her love of creative writing, music, especially piano, and her family kept her joyous her entire life.

Visiting hours will be held at the O’Connor Mortuary Laguna Hills on Wednesday, April 5th from 7 – 9 in the evening. Interment will be at Riverside National Cemetery preceded by a graveside service on Friday, April 7th at 9:30 in the morning. A memorial service will be held at The First Baptist Church of Redlands on Saturday, April 8th at 2 o’clock in the afternoon.

Memorial donations may be made in Ruth’s name to O’Connor Mortuary to help support a scholarship in honor of Rev. Dr. John and Ruth for young seminarians.