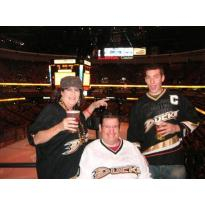 Roy was born the fourth child and only son to LeRoy and Flora Mytinger in Newport, Rhode Island. He attended Middletown High School and Santa Clara University where he majored in civil engineering.

He was a devoted son to his parents, a loving and caring brother, and an amazing uncle to Natalie, Joel, Jeri, Rico, and Troy. Roy was a special uncle and father figure to his nephew, Troy. He taught Troy how to be a respectful and caring young man. To his sisters, Marianne, Paula, and Wanda he continued to display a sense of humor and taught them how to find bright spots during his darkest days.

One of Roy’s passions was cars. He enjoyed restoring cars to their original pristine shape, the most famous being his 1967 Shelby Gt 500. He was considered a perfectionist and his cars were premier examples. He was a member of the Saddleback Mustang Association and the Cobra Owners’ Club of America where he grew close with many friends.

Another passion of Roy’s was watching hockey. He started watching his nephew and was hooked, wondering why he ever enjoyed baseball. He has been an Anaheim Ducks season ticket holder since 1993, and despite his illness, continued to enjoy Ducks’ games with friends and family. Determined to continue his fight, Roy attended a Ducks’ playoff game the evening preceding his death.

Roy will forever live in our hearts as a son, brother, and friend.

O’Connor will deliver flowers gifted to family to Roy’s service.