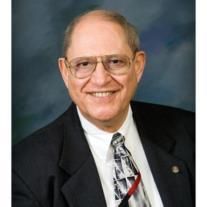 From Laguna Niguel, CA, formerly of Winnetka, IL. Born in Chicago, IL the only child of Dominic and Mary Theresa (Calfa) deceased. He attended Roosevelt University and was the President of the Alpha Sigma National Advertising Fraternity. Interrupting his study to join the Navy in the Korean War. After returning, he lived in Evanston, and Glenview, IL where he formed the Glenview Camping Club. He was a founding member of MARCOA Advertising Agency in Chicago, where he won various awards in Direct Marketing including the Diamond ECHO Award in 1988.

Laguna Niguel welcomed him in 1990. He was very active in the community volunteering his expertise in advertising and his time to the Laguna Niguel Holiday Parade, Citizen Police Academy, Disaster Preparedness Response, Niguel Chamber of Commerce, Rotary Club, Lion’s Club, St. Timothy Church, and was the founding member of the Military Support Committee.

Nicknamed the “DON” of Laguna, he founded the La Dolce Italian Festival for Laguna Niguel, which was held for 3 years. He was also a founding member for the American Legion Post in Dana Point Harbor. He served on the board for the Pageant of the Masters in Laguna for several years.

His commitment to Community service resulted in Ron being named The Laguna Niguel Citizen of the Year in 2006.

Services will be held at St. Timothy Catholic Church in Laguna Niguel on Saturday, September 26th, 2015, at 10am. Donations can be made to the American Cancer Society.