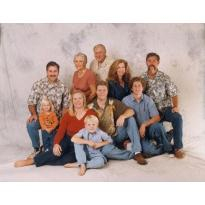 Whitley, Ronald A. 70, passed away SuperBowl Sunday, surrounded by his family. Born August 4, 1938 in Redding, CA, Ron grew up in Long Beach, where he began his lifelong love of sports. At Jordan High, he met his wife of 50 years, Josephine Jo Elzenga. Ron graduated from Long Beach State with a degree in Recreation Administration, then attended USC where he did graduate work in Public Administration.

Ron was the Director of Parks and Recreation in Newport Beach until his retirement in 1993. During his career, he was active in the California Park and Recreation Society, the Sister City program, and was instrumental in the success of many projects including new public parks, the OASIS Senior Center, and the Newport Theatre Arts Center.

Retirement gave Ron the chance to focus on his favorite pastimes-playing bridge, poker, and scrabble, playing with flowers, and watching his grandchildren play. He spent countless hours watching his grandson, Kevin, play baseball and basketball.

Ron has been a resident of Mission Viejo for 37 years, and the amazing neighbors of Christopher Park have been a huge support during his illness.

A memorial service will be held at 1 p.m. on February 6th at O’Connor Mortuary, 25301 Alicia Parkway, Laguna Hills. In lieu of flowers, donations may be sent to Vocational Visions, a non-profit organization supporting special needs adults that has been instrumental in the life of Ron’s son, Jim.

11 responses to Ronald A. Whitley