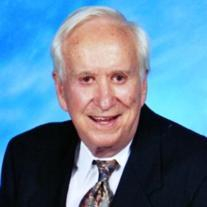 On Oct. 1st Shad had his 86th birthday at Saddleback Memorial Hospital with his wife, Bebe and friends at his side. On Sunday Oct 2, surrounded by his pastor, his wife and stepdaughter and her husband, he joined his parents Virginia (Davidson) and Edwin Shaddock in their heavenly home.

Shad was an Illinois resident having been born in Macon County. He was raised on a 160-acre farm. His eight-student schoolhouse was located on a corner of the farm. He graduated from Cerro Gordo High School where he played football and basketball.

In World War II Shad served in the Army Air Corps as a radio operator on Santa Maria Island in the Azores.

After the war he went to the University of Illinois and graduated in 1951. As a young engineer he started his career with Dunbar Kapple in Batavia, IL. In 1958 he joined Myers Sherman in Streator, IL. There he designed and oversaw production on the Gainsayer and then as vice-president of engineering for Peabody Myers, in Streator, Shad developed the Vactor 2100, a pneumatic catch basin cleaner. He held some 12 patents. He also worked extensively in India where, according to the local paper, ‘He played an important role of advisor and consultant to the Indian grain industry, formulating and carrying out their modernization program.’ Later he and his business partner had their own service company for heavy equipment, VIP International.

In 1994 he and Bebe moved into what was then Leisure World. Shad was active in the Rod and Gun Club where he served as treasurer. He was a member of the California Club, Club 30, Opera 100, the 110 Club and Laguna Country United Methodist Church. He was a 15-year Saturday morning Escort and Messenger Volunteer at Saddleback Memorial Medical Center.