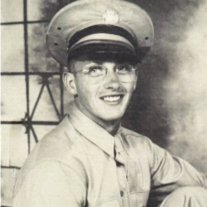 Robert K. Robinson (AKA Bob) passed away on February 15, 2013. He was a devoted husband, father and grandfather. The love of his life passed away July 2, 1998. Our dear father is joining his life-long love Bessie Louise Robinson in a wonderful new place for eternity.

He was born on December 16, 1923 in Bellaire Ohio where he played football, baseball, ran track and was a member of the band. He worked at Southern California Edison for 30 years and retired in Huntington Beach California in February 1, 1984. He served in the US Army in WWII. He was stationed in the Asia Pacific region and participated in the Japanese Occupation.

A memorial service was held at O’Connor Mortuary in Laguna Hills on February 26, 2013 followed by full military honors at Riverside National Cemetery.