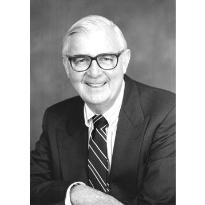 McDONOUGH – Robert Emmett 85, of Capistrano Beach, CA, passed away on November 21, 2007, surrounded by loving family. Born in Chicago, IL, he is survived by his beloved wife, Simone; children, Susan and Emmett; sister, Kathleen Ecklund; five grandchildren, Meaghan, Jenna, David, Stephen and John; and two great-grandchildren, Jackson and Ryan-Carlson. He was preceded in death by his first wife of 47 years, Elsa. Bob served in the Merchant Marine during World War II and earned his B.A. in 1949 at Georgetown University, School of Foreign Service. The founder of Remedy Temporary Services, in 1998, Bob made the largest gift of its kind to Georgetown University and the McDonough School of Business. Bob served on the Board of Directors of Georgetown University for a decade and was a Hoya through and through. Bob also served for many years on the Board of Directors of the Historic Mission Preservation Society in San Juan Capistrano and was a strong supporter of educational causes, including the San Juan Capistrano Mission School and the America Ireland Fund. A lifelong Democrat, Bob was active in local and national politics, making his last contributions to candidates in September. A vigil will be held on Thursday, Nov. 29, 2007 at 6:30 p.m. at the Mission Basilica San Juan Capistrano, 31522 Camino Capistrano, San Juan Capistrano, CA 92675. Funeral services will be held on Friday, Nov. 30, at 10:30 a.m. at the Mission Basilica. A reception will follow. O’Connor Mortuary, Directors. 949 581-4300