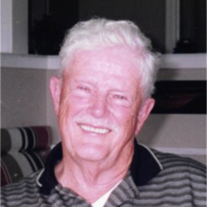 Robert C. Murray, 90, died at his home in San Clemente on March 25, 2017, of Parkinson’s disease. He was born in Ogden Utah, on June 27, 1926, to John S. Murray and Sylvan D’Autremont. He grew up in Malta, Montana and Seattle Washington. Robert joined the Navy in 1944, serving as a Yeoman Second Class. While in the Navy, he met Dorothy Voigt, a young Navy Wave, at the Seattle receiving station, where they both worked. Robert followed Dorothy back to Los Angeles after the war, attending the University of Southern California, and graduating with a degree in Chemical Engineering. Robert and Dorothy were married in 1947, and settled in Downey, California.

Robert was an engineer for the Los Angeles County Air Pollution Control District, later the South Coast Air Quality Management District of the State of California. He was one of the original “smogbusters” who helped to clean up the air in the Los Angeles basin. Robert retired in 1986, traveling widely with Dorothy and devoting himself at home to painting watercolors, gardening and caring for a succession of miniature schnauzers. Robert and Dorothy moved to San Clemente in 1996, and enjoyed spending time with Dorothy’s sister and brother-in-law, as well as weekly meetings with friends at Carrow’s. They were parishioners at Our Lady of Fatima and were regulars for Sunday breakfast at Adele’s after early mass.

Robert was a great sports fan, and a long-time coach of his children’s little league and pony-tail softball teams, coaching even after his children had left home. He played basketball in high school and later in an adult league and was an aspiring golfer after his retirement. Robert was predeceased by his wife Dorothy, who died in 2011, and his son Timothy, who passed away in 2015. Robert is survived by three children: Kevin, of Coronado, Kerry Keen of Laguna Niguel and Kathleen Collins of Foothill Ranch. In addition, he leaves behind six granddaughters, one grandson, four great-granddaughters and one great-grandson. He will be missed by all.

Funeral Service will be held on Friday, May 26 at 10 AM at our Lady of Fatima Catholic Church in San Clemente. In lieu of flowers, donations may be made to the American Parkinson’s Disease Association https://www.apdaparkinson.org/get-involved/