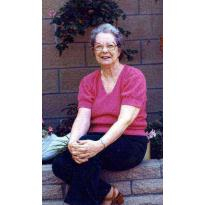 Rita Mary Johnson , 91 , passed peacefully on April 11, 2007 in Mission Viejo. A resident of Orange County for over 30 years, she was best known for her love and encouragement toward her husband of 65 years, Walt Johnson, who was known as Mr. Neighborhood Watch in Fountain Valley.

While Rita always said she had ‘no claim to fame’, she was much loved and admired for her devotion to her family and friends. her door was always open, ready with cookies and tea, her time instantly available to any who needed an attentive ear, a place to stay, or a moment’s respite.

The youngest of five daughters, Rita was born in Youngstown, Ohio. She moved to California as a young girl with her family and lived in Los Angeles graduating from Manuel Arts High School. She and Walt relocated to Fountain Valley in 1972. Rita considered her role as a housewife to be the highest calling of a woman. She truly a Proverbs 31 woman, which says in part, ‘ Many women do noble things, but you surpass them all’

She is survived by her daughters, Marilyn Johnson and Patricia Perry; son-in-law Bill Perry; Future son-in-law Larry Nauman; grandchildren Jean Hartzler, Karen Hartman, Will Perry and John Perry; by her great-granchildren Matthew, Kyle, Codi, Cassidy and Annalina; by grandnieces, Nicole and Kelly; and by many Children-of-Heart.