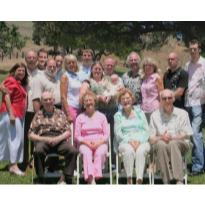 Dick was born in Wisconsin, but raised for the better part of his life in Modesto, California, where he joined the band in high school, beginning a career that revolved around music. He was a charter member of the Modesto Frank Mancini symphony orchestra, playing clarinet and saxophone. He went on to major in music at San Jose State College and UCLA, where he met his first wife, Dottie, who was the mother of their three children, and who died after years of illness in 1968. He served in the Army during World War II as a sergeant in the military band, serving overseas primarily in Germany. After the war ended, he returned home and began a career as a renowned studio musician, playing for Universal, Paramount, Warner Brothers and Disney studios. When the musician’s union went on strike in the early 50’s, Dick went back to school and obtained a degree in Accounting, eventually entering into an accounting partnership with a good friend and music contractor. Dick continued to play for studios when called upon, playing occasionally in the Dixieland band at Disneyland, and playing in a small band on weekends, but he was committed to his work as an accountant, specializing in taxes. After Dottie’s death in 1968, Dick continued his dual work life, and eventually met Davida ‘Dee’ Meeder. They married in 1971, and Dee adopted all three Anderson children shortly afterwards. When Dick retired in 1979, he and Dee moved from Glendale to San Juan Capistrano to enjoy retirement years, where they golfed, bowled and enjoyed wonderful neighbors. After retirement, Dick rarely picked up a musical instrument and donated his clarinets and saxophones to the UCLA Music Department. The last time the family heard him play the piano was at his 92nd birthday party, and it was as if he were in his prime. He loved music, his family and life. We will miss him! Dick is survived by his wife Dee, his two daughters Mary ‘Missy’ and Jane, their husbands Keith and Wendell, his son Rich ‘Andy’ and his wife Cheryl, six grandchildren, Alan, Allison, Tim, Sean, Andy, Evan and one great-grandchild, Lauren. A Celebration of his Life will be held at his beloved church, Capistrano Community Church, Monday, January 4th at 11:00 AM, 29251 Camino Capistrano, San Juan Capistrano.