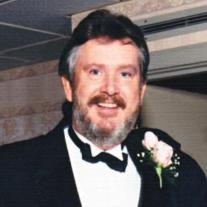 Dick was a graduate of Santa Clara University and a Veteran, having served his country in the U.S. Army. Over the course of his business career, Dick developed many award winning residential and commercial real estate projects and developments. Dick loved spending time with his extended family and, especially cooking for everyone. He was at his best in front of a BBQ. He will be greatly missed by his family and his many friends spread throughout the country.

Family and friends are invited for the recitation of the Rosary at 6 pm on Thursday, March 1, 2012, and Memorial Mass at 11 am on Friday, March 2, 2012, both at St. John Neumann Catholic Church, 5101 Alton Parkway, Irvine, CA. Reception to follow in the Parish Hall.

In lieu of flowers the family has requested that donations be made to Damien the Leper Society, (www.damientheleper.org/Donate.htm or Damien the Leper Society, P. O. Box 17428, Pensacola, Florida 32522). Donations are also appreciated to The American Cancer Society (www.cancer.org/involved/donate/donateonlinenow/index). Dick’s cancer was very rare but the treatment he received allowed us more time with him. Please make your donations in honor of Richard H. Tourtelot.