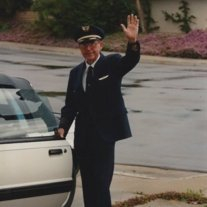 Rick passed away quietly in his sleep, December 1, 2013, after months of natural decline when someone has lived as long as their body will permit. That’s how life works. However, he once said, ‘I did not live a normal life. I did not allow it to be normal.’ And that is true.

Rick was born in Chicago, Illinois, June 8, 1930. At the age of 5 the family moved to Overland Park, Kansas.. He enjoyed living in the country. Besides his parents, his family was his dog, Tubby, two goats, and chickens. Everyasparagus season he sold asparagus along the highway. When he was 11 the family moved back to Chicago.

There he worked at a Chinese laundry for 5 years for Mr. King. It began his love of different cultures. Rick attended Lane Tech in Chicago and did well in his studies and music along with being the president of the Motorcycle Club.He owned an Indian and a Harley. Rick studied clarinet under Domenic Dicaprio and he received a music scholarship to Arizona State University. He was there for one year but jobs were too hard to find so he returned to North Western University in Chicago and majored in business.

The Korean War was still in progress and as a junior he chose to go into the military as an officer candidate. He took the Navy pilots test and was accepted into cadets at Pensacola. He served 23 years and flew the F6 Grummanamongst many others. He flew off the USS Intrepid when it was in the Mediterranean. Rick was on active duty for 5 years and 18 in the reserves. He retired as a Commander.

In 1956 he joined United Air Lines where his love of flying continued. He was first based in Chicago where he met his wife, Marie Kendal, a stewardess for United Airlines. Since she was a California girl he transferred to Los Angeles before they were married. They were married 54 years and had four children. Steve is married to May and they have two daughters Sina and Ploey. Steve is a first officer on the 747-400 for United Air Lines. Mark, his twin, is an artist who owns a restaurant in Pacific Beach called Pasta Espresso. Dan is married to Ying. He is a Family Physician and CMO for Outpatient Palliative Care for the largest healthcare organization in San Diego. Teri and her partner, Erin, have two boys, Badger and Vito. Teri owns Owl and the Dove Montessori School in Portland, OR. A desire to travel and see the world was instilled in them by Rick.

This eventually led to Ricks involvement in AFS, American Field Service, a student exchange program. The family hosted four students, one every other year until Teri was a sophomore in high school. The students stayed for a year, learned our culture and they learned theirs. It inspired Rick to learn Japanese and he studied it diligently even in retirement, actually studying in Japan off and on for 2 years. He would use it in his Captain announcements too when he flew Japan trips.

The cultures became of utmost interest for Rick so the family was also liaison for 24 other
foreign students. Rick was a letter writer and even better with e-mail. He kept in touch with everyone. When wedding invitations arrived from Austria, Japan, Israel or Russia they were accepted. Rick’s last years were spent interacting with Russian high school students in Protvino, Russia. He coached students in cultural similarities, differences and English pronunciation. This was all done on Skype. During Ricks illness everyone visited.vThey came from Japan, Austria, Thailand, Russia, Greenland, Belgium, Canada, Turkey, Germany, Mexico and France. He loved the world.

Rick is survived by his wife, four children, two daughter-in-laws and four grandchildren.