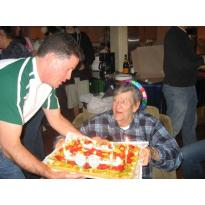 Dr. Raymond Dwyer passed away with family by his side at his home in Laguna Woods, California on October 19th, 2010. He was 90 years old. He was born on January 3rd, 1920, in the steel mill town of Gary Indiana, the youngest of three children. Ray was a championship swimmer and attended the University of Michigan. He joined the war in 1941 where he served as a radar operator aboard a B-17 patrolling the Panama Canal Zone and Galapagos Islands. Upon his return from service, he received his degree in medicine from the Indiana School of Medicine in 1951 as an anesthesiologist. Ray married his beloved wife Betty in 1951 and moved to Pasadena, California to raise a family.

He will be dearly missed by all his family, especially by his daughter Tara who cared for him for many years until his passing. He will be remembered most for his gentle soul, his humor, and his unconditional kindness to all who were fortunate enough to have crossed his path in life.