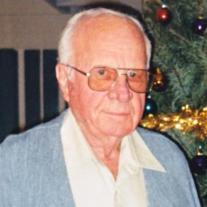 Ray Garner, 91, of Mission Viejo, CA passed away on November 29th, 2012. He is survived by his wife, Viola Harkey Garner and his son Larry W. Garner both of Mission Viejo, CA and is preceded in death by his oldest son Wendell R. Garner. He is also survived by 8 grandchildren and 12 great-grandchildren. He was born in Belleville, Arkansas in 1921. Ray was a retired machinist at Ameron (a leader in pipe systems technology). Ray was a World War II Veteran from the U.S. Air Force.

Funeral Services will be held on Tuesday, December 4th 2012 at 11:00am at White Emerson Mortuary in Whittier, CA, arranged by O’Connor Mortuary of Laguna Hills, CA. Interment at Rose Hills Memorial Park in Whittier.