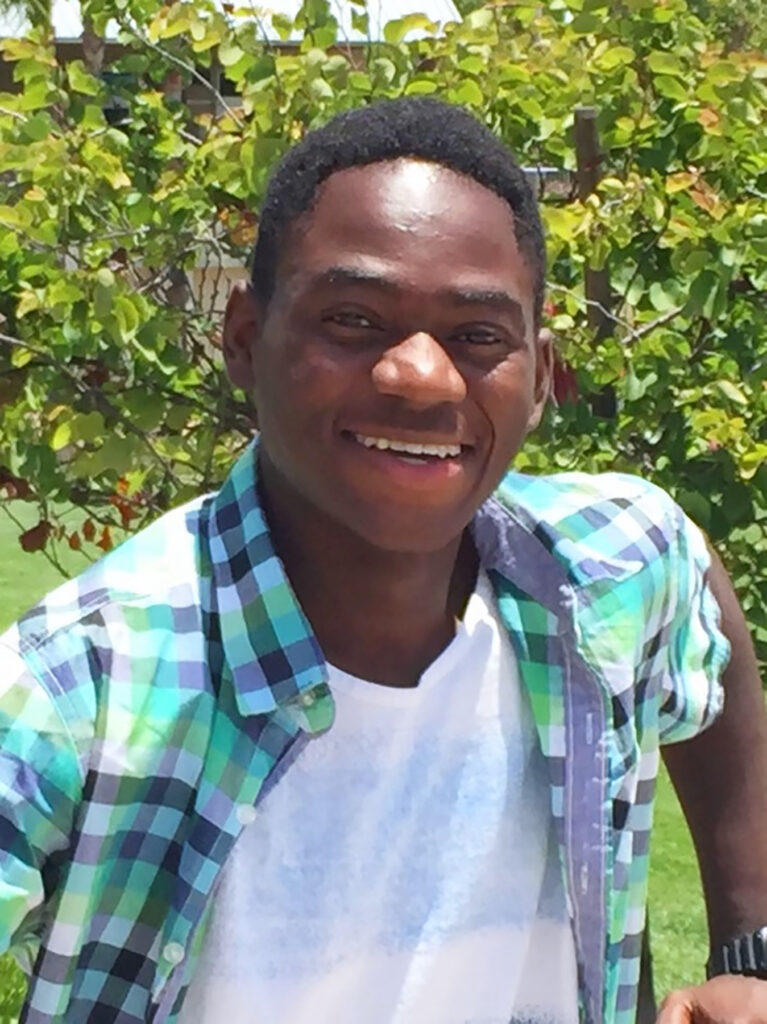 Prince Ntwali Mutabazi was born on April 4, 1997 in Mbiza, South Kivu Province in the Democratic Republic of the Congo to Ghislaine Nanfranka and Deogras Mutabazi. Prince was the fourth of nine children. He was baptized and instructed in the Catholic faith. He passed away on December 16, 2022 at the age of 25 in Orange, California. Prince was preceded in death by his father, Deogras, and a younger brother, Akili.

Prince began his life in a part of Africa that has been torn by war and poverty for decades. Growing up in Goma, North Kivu Province, Prince and his siblings often had to fend for themselves during the day as their parents lacked the means to pay school fees. Whenever he could afford to attend, Prince would stand out with his sharp mind and eagerness to learn. When he was nine years old, Prince caught the attention of Esther and Camille Ntoto, founders of a local charity that began to sponsor his education and provide after school support. He thrived in this environment and by the time he reached high school, he was attending the most elite private school in the region, Institut Metanoia, on a scholarship.

Meanwhile, he was also gaining notice in his after school program at the non-profit organization, Un Jour Nouveau in Goma. After learning about Martin Luther King Jr. in his leadership class and watching the famous “I Have A Dream” speech, Prince wrote his own “Dream for Congo” speech. He delivered his speech on stage during a talent show with American sponsors in the audience. He earned first prize and a standing ovation. That speech launched a collective dream for Prince to come to America to further his education. After his junior year in high school, that dream was realized when Prince boarded a plane for Los Angeles in August 2014. He was met with a scholarship organized by Mickey Bodnar of Saddleback Valley Christian School in San Juan Capistrano, a loving host family in Ted and Fayanna Worrell of Lake Arrowhead, CA, and the support of a local charity, Africa New Day in Seal Beach, CA. During his senior year, Prince played soccer, enjoyed road trips and Disneyland with his host family, and excelled academically, graduating with honors from SVCS in June 2015.

From 2014 to 2015 Prince was also followed by a film crew documenting Congolese youth striving to establish peace and reconciliation in their country. This film, called Out of Darkness: Congo Unites, was shown at Regal Cinemas in Irvine in May 2015. The young boy from the streets of Congo walked a red carpet and gained even more attention. Prince also volunteered his time at Mariners Church in Irvine, CA, helping to establish a Congo Ministry there. He also volunteered with the Junior High Ministry, accompanying Congolese youth from Los Angeles to attend Mariners’ Winter and Summer church camps for the first time.

In the fall of 2015, after an intensive summer English program at Azusa Pacific University, Prince matriculated to Chapman University in Orange, California on a generous scholarship. Pursuing a double major in Political Science and Creative Writing, Prince studied hard and made many friends among the Chapman students, faculty and staff. In 2017, Prince felt a need to return to Congo and reconnect with his family, whom he had not seen in three years. He remained in Congo for the following two years, working at Un Jour Nouveau and as a translator and event facilitator. In 2019, sponsored by family friends Eric and Tamara Salvio of Lake Forest, CA, Prince returned to Chapman University, still under scholarship, and resumed his studies. Unfortunately, in March of 2020, the Covid-19 pandemic changed the university experience for students around the world. Some thrived with remote classes; others, like Prince, struggled with the lack of human contact. Even after in-person classes resumed, by the time of his passing, Prince was still one year away from graduating. He was most proud to be a Chapman student and will be remembered fondly by many who knew him there.

Prince was a passionate student of life, literature and philosophy, and especially of writing, both prose and poetry. He had a poet’s heart and way with words. He wrote prolifically, even as a child, whenever he could find a pen or pencil and a scrap of paper. He wrote poems to and about people he loved. He wrote stories, especially autobiographical ones, chronicling his chaotic childhood in Congo, his dream of coming to America, and his struggle with finding “home” after he left his family behind. He will be remembered for his independent and conquering spirit, his love of God and holy scripture, his passion for his country and desire to see it change, and for the joy and exuberance with which he approached life and people. Prince lived an extraordinary life in his 25 years and left a legacy that will continue to reverberate in Congo and California and beyond.

He is survived by his mother, Ghislaine Nanfranka, his brothers Dieume, André, Augustin, and Baraka, and his sisters Neema, Esther, and Ange, along with many aunts, uncles and cousins in Congo and around the world. He also leaves behind many friends and loved ones across the US and Congo. We take comfort in knowing that he is now at peace. A prayer vigil and requiem mass will be held for Prince in his home parish in Goma, DR Congo on December 28. He will be interred at Ascension Cemetery in Lake Forest CA on December 29. A memorial and celebration of life will be held for Prince on January 10 at Mariners Church. In lieu of flowers, we ask for donations to be made to Africa New Day, which helps many children and youth in DR Congo, like Prince, to become leaders for positive change in their communities.