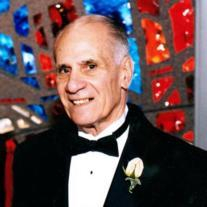 Peter Special passed away peacefully at his home in Laguna Hills, CA on 12/23/2012, after a brief illness, at the impressive age of 98 years. Peter was born and raised in Pittsburgh, PA, where he lived for more than 92 years, and then for the last six years of his life he was a resident of Orange County, CA.

He proudly served as a Staff Sergeant in the Army from 1941 to 1945, as a MP, stationed in both Africa and Fort Meyers, Florida. After WW II, he worked as a Barber for more than 30 years, until 1970, when he joined his Brother-in-Law in the family-owned heavy construction business, and after retiring in 1981, he kept busy working as a bartender at a neighborhood Irish Pub in Pittsburgh, until moving to sunny Orange County, CA in 2006. Pete was always devoted to his family and friends, and is survived by his 2 sons, Dan and Tom, his daughter-in-law, Malita, his Sister Rose Miller, his many Nieces and Nephews, and a large extended family. And we know Pete is happy to be joining his beloved wife Anne, (who passed away in 2008).

A Mass will be celebrated for him at St. Edward Parish in Dana Point, CA on Monday, December 31st @ 12PM, with a Visitation and Rosary held the day before on Sunday, December 30th from 12PM to 2PM at O’Connor Mortuary in Laguna Hills, CA. Following the mass there will be a Burial Service at Ascension Cemetery in Lake Forest, CA, with a Memorial Reception immediately following at the Village Greens Golf Clubhouse in Laguna Woods, CA. Flowers can be sent to O’Connor Laguna Hills Mortuary, or donations can be made in lieu of flowers to the Wounded Warrior Project Foundation, https://support.woundedwarriorproject.org/Default.aspx?tsid=66