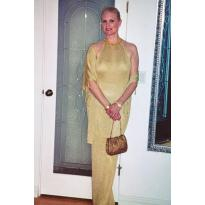 Pauline was born on February 16, 1960 in Newcastle, England. She was the daughter of Phil and Rita Chilton and the younger sister of Valerie and Anne. She grew up in the Newcastle area where she excelled at sports and became a top fashion model at age sixteen. From sixteen to age 21 she shuttled between Newcastle and London pursuing her modeling career.

The Chilton name is also significant in American history as the first person to step onto Plymouth Rock from the Mayflower was a fourteen year-old-girl named Mary Chilton. Pauline’s side of the Chilton family decided to stay in the United Kingdom. In 1980, Pauline decided to follow her ancestors to America, and despite having no job, no money, and not knowing anyone she arrived in Orange County, California.

In the next ten years, Pauline established herself as a prominent resident of Orange County. She continued her modeling; taught fashion at Fullerton College, as well as taught etiquette to both adults and children. Additionally, she helped establish the ‘Days of Taste’ initiative for the American Institute of Wine and Food AIWF, a program designed to teach etiquette to fourth graders. In her spare time she sold real estate and became a good friend to countless ladies. And, she became one of the most accomplished shoppers of women’s clothing in America. Pauline was also an accomplished painter, but refused to exhibit her work.

On September 10, 1990 she taught an etiquette class at the Robert Mondavi Cultural Center in Costa Mesa, California–one of her students was Sal DiMascio. He brought her an apple after class and on September 10, 1995–exactly five years later, they were married. Pauline continued her various careers on a part time basis, and she and Sal collected art and traveled the world for the next fifteen years. Pauline and Sal visited her beloved England often each year, and her family also made many, many trips out here to see her. Pauline also became a U.S. citizen. Pauline and Sal claimed that they were on their honeymoon for their entire marriage.

In 2010 Pauline founded ‘The Pet Club,’ a woman’s charitable organization devoted to raising funds for the San Clemente-Dana Point Animal Shelter. This organization will continue and has been renamed ‘Pauline’s Pet Club,’ in her honor. Donations may be made to the Pet Project Foundation benefitting the animals of the San Clemente-Dana Point Animal Shelter, 949-492-1617 or to Susan G. Komen for the Cure, 714-957-9157.

Pauline’s most important achievement was to become a dear friend to almost everyone she was friendly with. She was Sal’s best friend. She was a force of nature who will be missed.