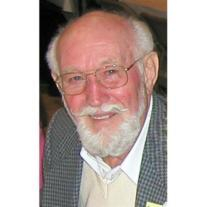 Paul Addison Stubbs, 86, passed away on Sunday, April 29, 2012 in Laguna Beach, CA after a brief illness. He is survived by his daughter Traci Scinto, daughter-in-law Lisa Stubbs-Almlie, two grandsons, Cody and Shane, and two sisters, Helen Allison of Kansas and Marge Handy of Missouri. Paul will be reunited with his wife Joan and son David in El Toro Memorial Park. Joan predeceased him in 2004 and David in 2011.

Paul was born August 16, 1925 in Kansas City, KS. He was the youngest of 6 children. During World War II, Paul served aboard the Navy’s USS Belleau Wood in the Pacific Theater. In 1952, he married Joan Smiley in Saint Louis, MO. They relocated to California, settled in Woodland Hills, and raised two children, Traci and David. Prior to retirement, Paul worked for 54 years as a Microscope Specialist.

In 1980, Paul and Joan relocated to San Juan Capistrano where he lived independently until his death.

Paul was a gentle, sweet man who was loved by all who knew him. Always interested in others, Paul was a loving father and husband, an earnest listener and loyal friend. He will be forever in our hearts.

15 responses to Paul A. Stubbs