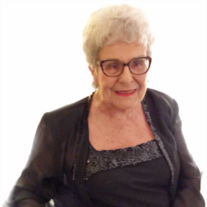 Patricia Ann Gianforti Catalano passed away peacefully on December 17, 2017 in Newport Beach, CA. She was born on August 15th, 1933 in Rochester, NY to Rosemary and Burt Gianforti.

Patty moved to Southern California in 1967 along with her husband Charles and 4 children.

She was predeceased by her parents Rosemary and Burt Gianforti and her loving husband, Charles B Catalano Jr.

She belonged to many Italian and Catholic organizations and was responsible for instituting the Southern California chapter of the Scoliosis Association. In lieu of flowers please send any donations to the National Scoliosis Association c/o Stanley Sachs, PO Box 1705, Boca Raton, FL 33481-1705.

A Memorial Service will be held on January 9, 2018 at the Santiago de Compostela Church in Lake Forest, California at 10:00 AM with Reception immediately following in the Church Hall.