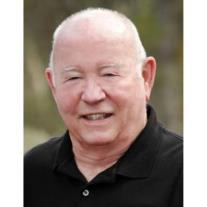 On Friday, October 30, Orlando L. Busby, Jr. peaceful passed away with family members by his side. Orlando, known affectionately as Buzz, was born on February 6, 1937 in Alabama to Orlando and Mary Busby. As a child, Buzz was an excellent marksman, having won an award for marksmanship at the age of 12.

A few days after his 20th birthday, Buzz joined the United States Marine Corps. What followed was an illustrious and honorable 22-year career. A helicopter pilot during the Vietnam War, Buzz was awarded among many others, The Distinguished Flying Cross and The Meritorious Service Medal. He flew numerous aircraft including the Sikorsky CH-53 Sea Stallion. On several occasions throughout 1968-69, Buzz piloted Marine One for flights carrying president-elect, Richard M. Nixon.

In 1959, Buzz married the love of his life, Loretta Mullis. Together they raised 3 daughters, Barbara, Linda, and Mary. Throughout the years, Buzz and Loretta welcomed 10 grandchildren, and 2 great-grandchildren. Among his many accomplishments, Buzz held his family as his most proud.

He worked at Hughes Aircraft for 12 years as well as tirelessly volunteering his time at Saddleback Church where he and Loretta were members for over 30 years.

The Marine Corps motto, Semper Fidelis, translates to always loyal. Buzz Busby embodied that motto by always remaining loyal to his country, friends, and family during his 78 remarkable years. He will be missed.

Memorial services to be held in the Plaza Room on the Saddleback Church Campus, Thursday, November 5 at 11:00 am.