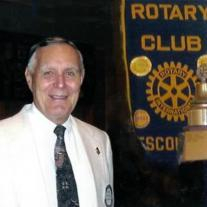 Norm died April 24, 2012 at home following a short struggle with Melanoma. He will be terrible missed by his brothers Don Syler and Nelson Syler, his wife Luella, his children Luann and Scott, his son-in-law Frank Hickey and grandchildren Brannon and Katarina, and all his many friends.

Norm was born in Massillon, Ohio on September 23, 1933 to Reverend Donald and Sadie Syler. Norm grew in Ohio and his first passion in life was sports, specifically baseball. It is said he had a mean fast ball, with many broken windows to his credit.

It was at his first teaching and coaching job in Solon, Ohio where he met his wife of 54 year, Luella. Norm and Luella shared a very special relationship; Norm had a lot of friends and loved to entertain, and Luella, being a Home Economics teacher loved to cook. Norm then went on to teach and coach in Luella’s home town at Ravenna High School.

After their children were born, and their son was diagnosed as having special needs, Norm decided that California offered the best opportunities for Scott. Norm and family moved to Orange, CA sight unseen, as he had a job at Orange High School. Norm taught at Orange High School for 25 years.

Upon retiring he moved with his wife and son to the home they built in Valley Center, CA. He also launched into his new career as the Executive Director of the Escondido Historical Society and found Rotary. As a preacher’s kid, Norm learned early about giving and serving the community. Rotary became his passion in life.

His grandson was born in 2000 and his granddaughter in 2004; and the sacrifice was made. They moved back to Orange County to be closer to their beloved grandchildren. Mission Viejo became home and Norm joined the Rotary of course, and made new friends and served his new community.

Memorial service will be at 3:00pm on Tuesday, May 8 at Shepherd of the Hills United Methodist Church, 26001 Muirlands Blvd, Mission Viejo, CA 92691.

In lieu of flowers the family asks that you donate to